Having hosted the Logies red carpet special for Nine a few times, I’m lucky enough that a few designers contacted me about wearing their dresses. It’s so fantastic to try on all these gorgeous dresses, but its so awkward when they just don’t feel quite right. How do you explain that to a designer who has spent hours creating these gorgeous gowns? Marina (my stylist at Nine) is very tactful and diplomatic…so she did all the talking and I stayed in the background. I wanted a dress that was classic, old Hollywood but still with some sex appeal. My idea of a winning dress, is one that hints at sexiness, without revealing anything exciting. Not an easy line to walk at times! 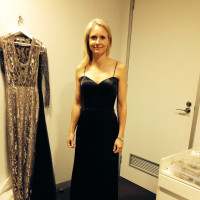 Mariana Hardwick sent over a few dresses and I loved the way this dress fitted me, but it was too plain for the Logies. We started playing around with the silver lace which would photograph really well. I found some inspiration on Pinterest and an idea was forming. 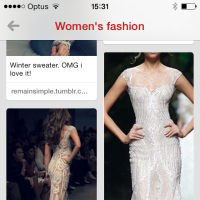 We went to Marianna Hardwick and asked if they could layer the lace over the black base of the dress. After countless hours of Marianna’s talented ladies choosing lace, stitching it and attaching scalloped lacework, my dress was nearly complete. We chose a solid, modern belt so that the completed look wasn’t too vintage. It needed a very subtle modern edge to it, whilst still retaining a classic look.
Black nail polish also added to a contemporary feel…the finishing touch.

Sky high heels and teasing in my hairdo added a few inches to my height as I’m a vertically challenged 5″7. It’s a dangerous game to play though as I certainly didn’t want to topple over in front of a wall of cameras! An hour later, and I’d navigated my way into the Palladium room at Crown, ready for the big show. Or is the red carpet the big show? It’s hard to tell, these days!

A huge, bottomless pit of thanks to Annalise, Franca and the hard working team at Mariana Hardwick. You were wonderful!! 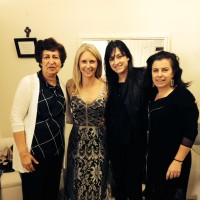 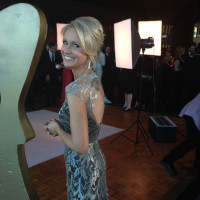